Don't Tie the Paper - The single-stream facility and its screens work when paper is loose and two dimensional. Do not tie or bundle any newspaper, corrugated cardboard, magazines, junk mail or any other paper; just put all loose paper into the same recycling container with all of the other material. Flatten or cut corrugated as needed, and again, use additional containers when you have more than 50 pounds of recyclables.

Towns Where We Collect 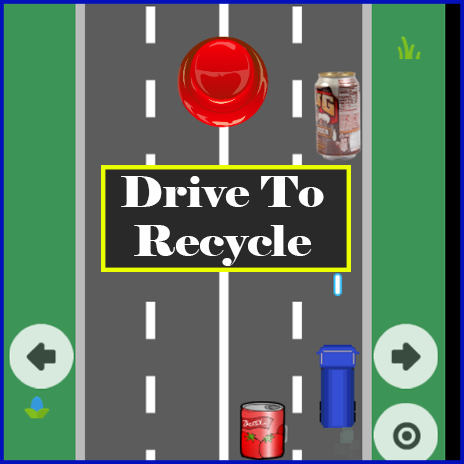 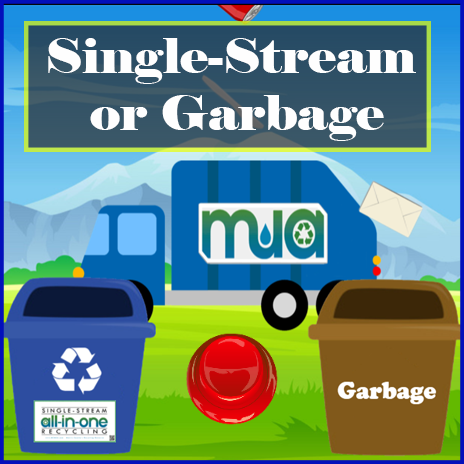 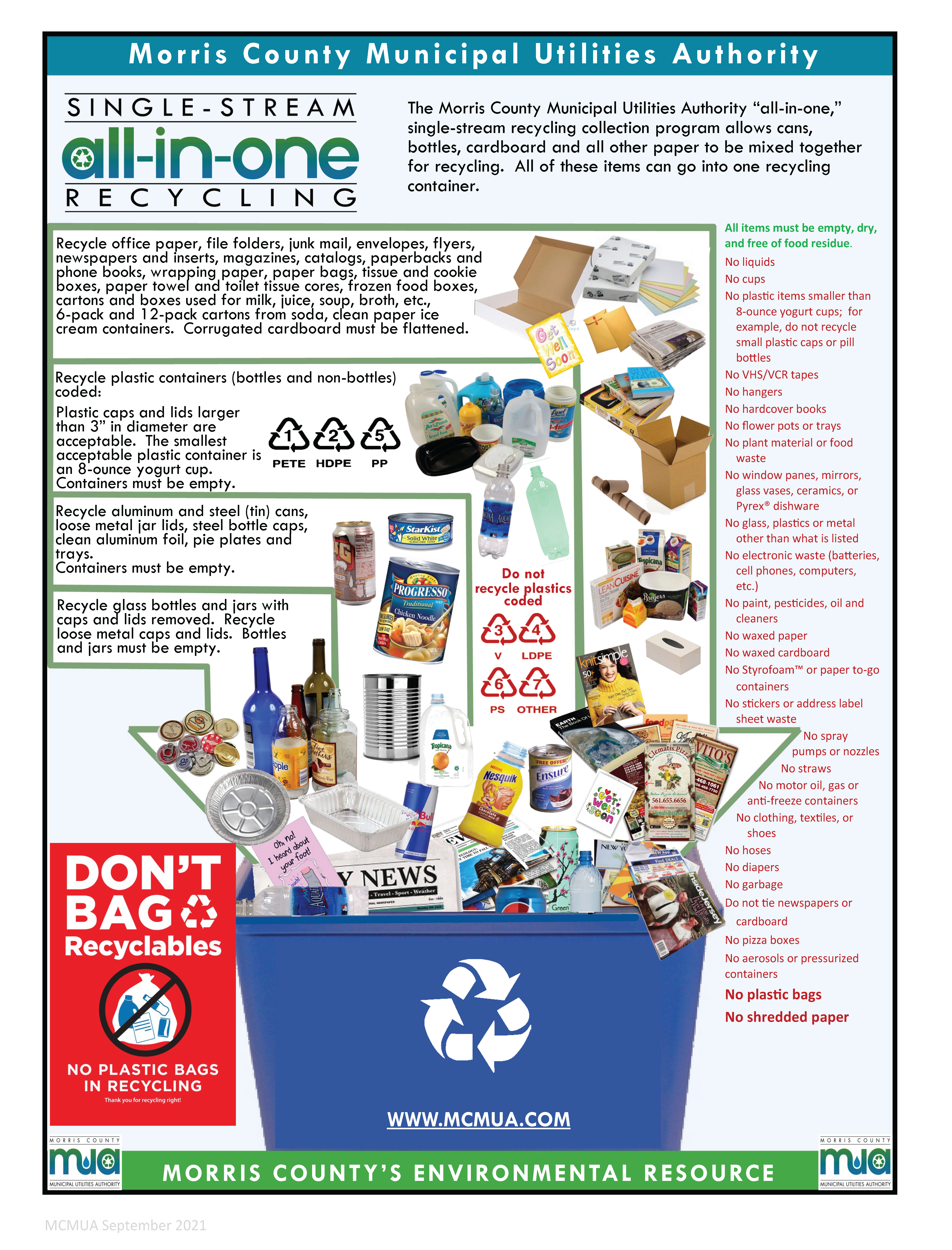 Avoid turning recyclables into litter on a windy day

Only recycle what is acceptable 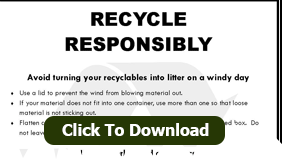 When in Doubt, Throw it Out — That’s the Best Decision for the Environment

Not everything with a recycling symbol goes into your curbside recycling bin for single stream collection.

The MCMUA, which collects recycling in many of Morris County’s 39 towns, implements a “tag-it and leave-it” inspection program. If your recycling contains contaminants, the entire bin could be left at the curb.

The goal is to ensure that bulk recycling loads sent by the MUA to the recycling market don’t get rejected (and sent to a landfill) because they contain too many items that don’t meet recycling standards.

The most problematic recycling contaminants found by the Morris County MUA include:

Just for clarification, these items don’t belong in your recycling container either: Paper coffee cups, dirty pizza boxes, paper towels, and some less likely items such as diapers, bowling balls, hypodermic needles, animal carcasses, batteries and electronics. Batteries can cause a fire at a recycling center. People sort recycling – not machines, so keep them safe.

Also, recyclables must be empty, clean and dry — without food residue.

(PDFs signs for recycling depots for download and/or print)

Need to make business recycling easier? The Republic Services recycling facility accepts materials from businesses as a single-stream mix or with bottles and cans kept seperate from paper but you need to contact them directly. Please be aware that corrugated cardboard isn't the be-all and end-all of recycling for business. Click here to read about recycling mandates for Morris County businesses.

The MCMUA's role in single-stream begins at curbside and ends on the tipping floor (a concrete pad) at recycling facility where recyclables are dumped (or tipped) from collection and roll-off vehicles. From here on the facility begins to separate the single-stream mixture into salable commodities such as baled paper, plastics, metals, etc. The recycling facility then uses front-end loaders to place the single-stream recyclables in giant hoppers awaiting their turn to being the recycling roller coaster ride of their lives.

The single-stream recyclables are fed onto an inclined conveyor belt to begin the 45-second journey through the single-stream separation system. The material is conveyed to a quality control hand-picking station where workers remove what was incorrectly put into someone's recycling bin. Many plastic bags and other contaminants are removed here. Removing contaminants is labor intensive and expensive, so it's very important to put only the acceptable recyclable materials into recycling bins at home and businesses.

Rotary-Screen Separators - breaking up the single-stream

From the disk screens, the separated materials fall between the disks onto a series on conveyor belts that transport these materials to a variety of of picking stations and separation technologies. The conveyor system is a sophisticated transportation network that efficiently delivers material to subsequent processing stations.

Paper Picking Stations - cleaning the paper to get top dollar

The conveyor belts deliver fiber (paper) to other conveyor belts where hand-pickers clean the material streams. There are conveyor belts for newspaper, mixed paper, and corrugated cardboard. Finally, there is a picking station where contaminants and paper are removed from bottle and cans prior to them being directed to the original and bottle and can recycling facility located next door at 103 Iron Mountain Road.

Bottle and Can Sorting Facility - processing the container mix

For over a decade, the MCMUA has delivered bottles and cans to the recycling facility located next door at 103 Iron Mountain Rd. Prior to 2011, FCR, Morris (the company that is now known as Republic Services operated the facility. Bottles and cans from the single-stream facility at 105 Iron Mountain Road are conveyed from that location to 103 for processing.

After the material is picked and clean to the best capabilities of the system at the single-stream facility (105 Iron Mountain Rd), it is conveyed and staged in a series of seven bunkers, two for residue (garbage destined for the MCMUA Mount Olive transfer station), one for rigid plastic, and the remaining for corrugated, newsprint, and mixed paper. On demand, the material is automatically extracted from each bunker after a giant automatic door is hydraulically opened, gaining access to the recyclables in the bunkers. From the bunkers, the material is conveyed up to a baler that compacts the recyclables into bales tied in metal wire ready for sale and transport. The bunker system and the sophisticated automation technologies enable a variety of materials to be stored and automatically transported to one single baler. A forklift collects the finished bales as they are extracted from the baler and places them in storage areas waiting for transport to recycling markets throughout the world. 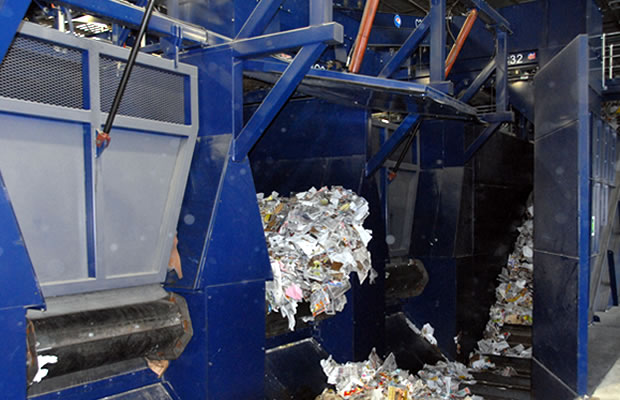 Video tour from start to end of the single-stream recycling process.

The MCMUA has entered into contracts with both ReCommunity Recycling and Morris County towns establishing partnerships benefiting everyone when recycling is done properly. The better the recycling, the more all will share in the profits and environmental benefits associated with single-stream recycling! Optimizing the single-stream mixture by including valuable recyclables and minimizing garbage improves the bottom-line of the recycling facility and the shared profits of the contracting partners.